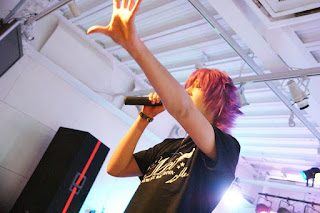 For our last blog entry of this year, we have an especially sweet treat for you to savor. Our hip hapa homee for this bi-month is the incredibly kawaii and talented Jun Leo Mirzat, aka Jun Leo Xi, aka Prince Jun Leo, but best known as Moon Prince. Your Hip Hapa first became aware of this extraordinarily gifted artist when we became Facebook friends in 2010 and he was shooting a series of videos about mixed-race folks in England. Since then, we’ve watched his career blow up all over Asia. But let him tell his story in his own words:


Q: Jun Leo, who are your parents and how did they meet?

A: My mother is of Chinese-Uyghur descent and my father is of Italian descent. They met in a town just outside of London. Funny story, actually. My mother was putting her washing out in the garden to dry when suddenly the washing line collapsed. My father was visiting his brother who lived next door to my mother. He vaulted over the fence to aid my mother in picking up her washing, which probably included her panties, ha ha. At that time, my mother had two other children, my elder brother and sister from her previous marriage with a British man of English and South African descent. After my parents got married, along came me! 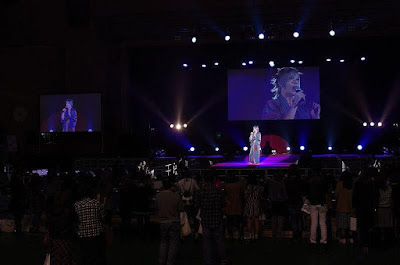 Q: You left England for a music career in Japan. What inspired you to move to another country?

A: Well, during high school I was made fun of for my Asian features. Other kids would make fun and pull their eyes up to replicate Asian eyes. I was around the age of 11 at that time. Before that, I’d never really thought about race very much.

Now when people criticize me for me, I don’t tend to back down. I tend to push further and make that point a plus, rather than a negative. I then started to discover Chinese pop. From that, I also found J-pop and K-pop which both had a reasonable following in the East. 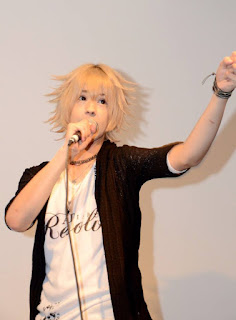 When searching for J-pop, one of the first artists I came across was Ayumi Hamasaki, who is still one of my favorite Japanese artists. Through Japanese music I then discovered Japanese street fashions and subcultures such as ‘Gyaru, Gyaruo’, ‘Visual Kei’ and others. It just felt like a part of who I am, which needed to be conveyed in the way I dress. It was just a way of expressing how I felt inside and a way to feel stronger.

So from about the age of 13, I was flicking through a magazine called ‘Gothic & Lolita Bible’ where I discovered a male model called Riku who had a soft androgynous look I felt I could relate to. From then, I wanted to become a model in Japan for street fashion magazines.

After that, I discovered Leah Dizon. She was born in Las Vegas to a half-Filipino half-Chinese father and a mother of French descent. She became an idol in Japan with a successful pop career. Since she was another hapa born in the West and moved to Japan to be a star, she became my idol and made my dreams feel possible.

So from then on, I wanted to become a singer the most--but an all around ‘entertainer’. 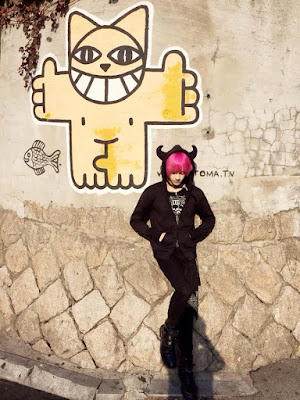 A lot of people assume I had rich parents and that’s how I ended up in Japan. I grew up with a single mother working several cleaning jobs to put food on our table. We never went without and she gave me some amazing values I am grateful to have been taught. But we never had a lot of money. I left school and went to a community college to study fashion. I didn’t really know what I wanted to do aside from my career in Japan. If ever asked what I wanted to do with my life, that’s the only thing I could think of. Of course, people doubted me and mocked me. I may not be the best selling artist in Japan...yet, but here I am, ha ha.

I then got a job in fashion retail, which was horrible, but that’s another story. I stuck at that job, and it’s not a time I look back at fondly. After that, I managed to get a nicer job in the same field but in central London. I’m one who likes to be busy and in a place with lots of people. So I was far happier working in central London. I worked there for just over a year, saving money to move to Japan.

After that I had a strange feeling that it wouldn’t be long before I moved to Japan. In Winter 2013, I was contacted by a music production manager who worked in the Kansai region in Japan. We then began to talk and he was interested in working with me. 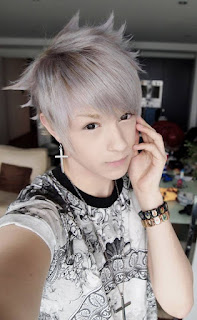 In Summer 2014, one of my managers at my retail job broke the news to me they were going to be possibly dropping a few people in a month’s time and I was one of those people. They had kept me on a temporary contract, which they would just renew every month or two. Which was just the company’s way of saving money. By this time, my Japan plans where pretty much fixed. So, I just lost interest in the job. I had worked some long, stressful hours, being pressured to do overtime when I didn’t need the extra money or want to do it. So, it was more about the moral of it, they where just going to casually drop me. 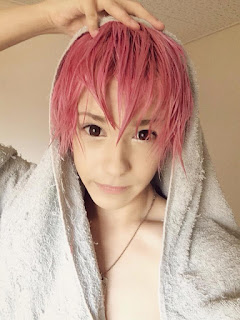 Since I didn’t really need the job anymore, I started taking extra breaks, ha ha. Going for extra cups of tea and such. But one morning, I just decided to not go in. If they weren’t possibly firing me, I would have done the procedure properly. They did, however, send me a letter that ‘could lead to dismissal’ which obviously if I wasn’t coming into work, I wasn’t going to be going in so they could fire me. But I guess that was all the procedures they have to go through with.

I used that time to see my family and friends. My grandfather had passed away a short while prior to leaving, which was hard to deal with. I went to his funeral just 3 days before leaving the country. I then had to pack my life into a suitcase for an exciting, scary and uncertain future. 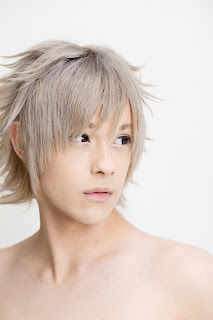 Q: Do you speak Japanese?

A: When I came here, I could speak very little Japanese. It was tough at first because I felt a little lonely, not being able to express myself well with no English speakers where I was. But I learned Japanese through survival. I picked up a lot very fast. Although now I am not fluent, I can hold a conversation without too much struggle. I’ve had a few times where people haven’t realized I wasn’t born here which is a compliment to my accent, ha ha. But I’ve still got a long way to go before I can say I’m fluent. 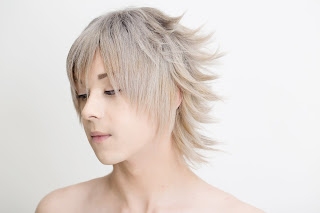 Q: What do you find the most interesting about living in another country?

A: I guess, the fact I live in another country doesn’t really cross my mind too much. Although I was born in the U.K., I never felt I belonged to the U.K. It’s just another place on this planet I have a connection with. I feel extremely comfortable in Japan for the most part.

I definitely appreciate the safety of Japan. I don’t worry about walking alone at night. Just like every country, Japan isn’t perfect. But as far as I know, Japan is the place for me and it’s perfect for me. 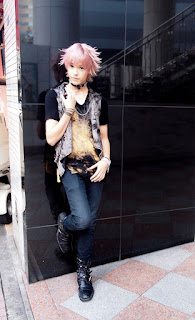 Q: You have huge fan bases in Europe and Asia. Are you looking to North America to repeat the same?

A: I honestly don’t feel like I have a huge following yet. But I appreciate every last follower. Their support means so much to me.

I’m not really looking to be mainstream in the West at all. Although lately I’ve gained quite a few followers in China, Japan is where I want to gain success. I would love to one day perform in North America and various places, possibly at anime conventions. That would be real fun!

(Editor’s Note: Moon Prince, we wish you would have performed at the Anime Matsuri at the Honolulu Convention Center last weekend!) 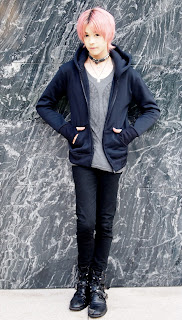 Q: How many albums have you released so far? How would you categorize your music?


A: I haven’t released an album yet. I actually just finished recording for my first mini-album! I’m also working on some free work I want to release online.

It’s hard to categorize my music. I don’t want to stick to one genre. I want to experiment, but I don’t want my music to become a blur. I want everything I release to feel like a ‘Jun Leo song’. I am very particular with how I want to be presented. The current set of songs are all J-pop, there are some with an electric dance feel to them. But there is a variety on there! My current music producer is extremely talented and has done such a great job with the production. I am really excited to release my first CD!

Q: Are you doing anything else—like acting or otherwise performing in Japan?

A: I am actually! I model! In early November, I modeled for Japanese brand Ayymatsuura in Seoul, Korea. In December I am walking the catwalk for the same brand in Osaka!

I have also been trained in the Japanese art form of ‘nihon buyo’. I have performed at several stages in Nara. 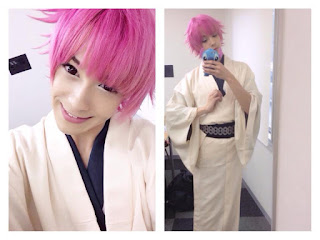 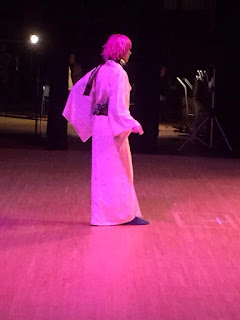 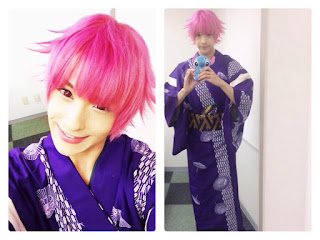 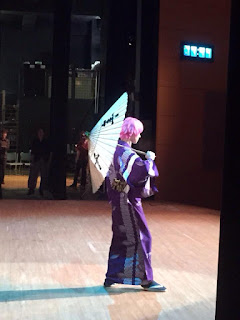 Q: What are some links to your work?

A: I have released several previews of songs that will be featured on my mini-album. They have yet to be completely mixed and mastered, so these are rough copies of the final product.

Domo arrigatou gozaimasu, Moon Prince! You are so destined for greatness! 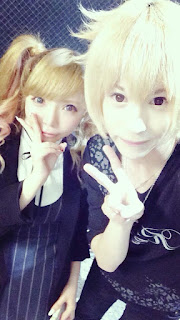 
Posted by Yayoi Lena Winfrey at 3:25 PM No comments: