Novel Novelist: Outsider Or In? 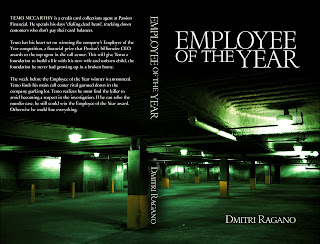 Q: What motivated you to write Employee of the Year, about a mixed roots character in a multicultural workplace?
A: I think there are more young people growing up like my daughter, who are mixed roots and exposed to many different customs, values, languages and ways of life. Yet, I believe there is still a lack of stories in our popular culture that reflect this. So I felt there was an opportunity to write about characters that grow up straddling different racial and cultural experiences and how they negotiate their own identity. There's no tribal blueprint for the type of person they should try to become. It's a riddle they have to solve on their own.
On top of that, my story is set in a big financial company in Los Angeles. In this city, on top of mixed roots experiences, you have mixed class experiences, interactions between people from different educational and economic backgrounds. These are all things we have so much trouble talking about in America. A company is a good setting for a story about this. In Los Angeles, the 1 percent and the 99 percent only set foot in the same zip code during working hours.
Q: Is the main character, Cuauhtemoc McCarthy, based on your own personality and experiences?
A: In many ways, Temo is based on who I've tried to be. I've tried to be someone who retains a certain honesty and purity while being pragmatic about what it takes to survive and thrive in the modern world. Temo's job as a collections agent is to chase people down and convince them to pay their credit card debt. If he can't do this successfully, he loses the only way he knows how to support his wife and family. He feels ambivalent about this, just as most working people have mixed feelings about how they make a living.
Q: I first learned about you as a journalist from your interview with Jero. How does writing fiction differ from reporting?
A: The interview about Jero is a funny story about how lives and cultures intersect. My father worked for 30 years as a schoolteacher in inner-city neighborhoods around Pittsburgh. When my wife and I got engaged in 1998, we went back to Pittsburgh and visited my father's school. There was a woman from Peru who was teaching Japanese so we visited her class to talk about Japan. I remember there was a kid in the class who knew a little Japanese from his grandmother. For the next ten years, I had no contact with him, never thought about the visit to the school, et cetera. Then suddenly, in 2008, I was on a business trip in Peru and I saw something on the cable news about Jero, a guy from Pittsburgh who went to Japan and became a singing sensation. It turns out it was that same kid I'd visited at my father's high school! He remembered my father as one of his teachers. So, after leaving South America I had to go to Asia for business. My wife and I were in Japan and I decided to do an interview with Jero for the local Pittsburgh newspaper.
I think this is the best illustration of the difference between fiction and journalism. With fiction, you're taking the essence of the people and experiences from life and molding them into a narrative. With reporting, you end up discovering these real life connections and events that are so random and serendipitous that you couldn't make them up because no one would ever believe it. I mean, look at Obama. You couldn't write a fictional story about someone with his background becoming President of the United States. No one would find it plausible.
Thank you, Dmitri for sharing. Hip Hapa Homeez, you can buy a copy of Employee of the Year on Amazon or download it to Kindle for 99 cents.
http://www.amazon.com/Employee-of-the-Year-ebook/dp/B005UJR0RW/ref=sr_1_2?ie=UTF8&qid=1319933755&sr=8-2
Here are some of Dmitri’s feature articles:
Interview with Jero:
http://www.post-gazette.com/pg/08146/884455-109.stm
Interview with Howard Zinn:
http://www.post-gazette.com/pg/09263/999070-109.stm
Japanese cell phone culture:
http://thefeaturearchives.com/topic/Archive/Growing_Up_in_the_Age_of_the_Keitai.html
And, books citing his journalism:
Global Cultures by Frank Salamone http://www.amazon.com/Global-Cultures-Frank-Salamone/dp/1443809942/ref=sr_1_3?ie=UTF8&qid=1319933755&sr=8-3
Smart Mobs by Howard Rheingold http://www.amazon.com/Smart-Mobs-Next-Social-Revolution/dp/0738208612/ref=sr_1_1?s=books&ie=UTF8&qid=1319933960&sr=1-1
Here's another shout-out; this one to Watermelon Sushi Associate Producer Andye AndinhaNiakan for this blog entry about Your Hip Hapa: http://africanasianbusinessandculturalexchange.wordpress.com/2011/08/12/yayoi-winfrey-japanese-african-american-film-maker-pioneer/
And, don’t forget, we’re still running our Ask My Cuz @Oprah campaign on twitter: http://ning.it/oEQYHS http://twitition.com/gneyv
Until we cross ISP’s again, remember to fan us, follow us, or friend us, but please connect!
http://www.watermelonsushi.com
http://www.facebook.com/watermelonsushi
http://www.facebook.com/hapateez
http://twitter.com/watermelonsushi
You can also request membership in the Hip Hapa Homeez group page on Facebook.
Your Hip Hapa,
Yayoi
Posted by Yayoi Lena Winfrey at 12:05 AM No comments: