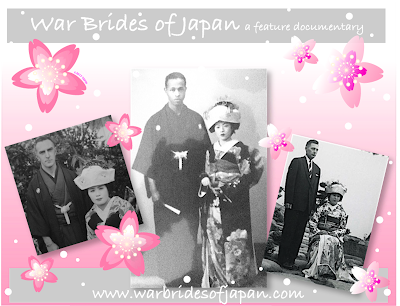 While the big news for mixies globally is the upcoming wedding of biracial American actress Meghan Markel and Britain’s Prince Harry, there are other brides in the news, too.

Read all about it!

One year after we completed Principal Photography on our War Brides of Japan documentary, we found ourselves in California once again.

In early November, documentary participant Elaine invited us to the elegant birthday party of special blasian lady, JoAnna, in Long Beach. Surrounded by her lovely female friends, we took dozens of photos and later marveled at how many of us had Japanese war bride mothers and African American military fathers.

See for yourself, here:

Later on in our travels, Elaine, who's been one of our staunchest supporters, hosted a fundraiser for our documentary. Yes, we’re still in need of funding, and will likely launch a campaign soon so we can pay our amazing composer, LA CAt, what she deserves to have. Meanwhile, you can donate here:

But back to the fundraiser, a good time was had by all who participated at a Torrance karaoke bar where Elaine handed out Coach bags as prizes in several raffle drawings.

Here are some pix from that event:

Sadly, while we were in California, we also lost one of our favorite friends in entertainment. Rhoda Robinson Hicks was an energetic writer and performer, and her son David promises to carry on her legacy.


While we’re still busy editing War Brides of Japan for an early 2018 release, we invite you to visit the links, down below, that provide more info about the film.

We thank you for your continuing support and encourage you to donate to our cause if you haven’t already. Every penny is 100% tax deductible. We do appreciate each and every one of you and send a big ARRIGATOU!

If you’ve already made a donation and would like us to post your photo on Facebook and/or the name of the person you made the donation in honor of, please let us know.

We’ll see you next year in March 2018 just in time for sakura and War Brides Of Japan.

Here are links to the film:

Posted by Yayoi Lena Winfrey at 3:37 PM No comments: