A lot of crazy things have been happening in our topsy-turvy world lately. But one thing that remains constant is this blog and the amazing folks we interview here.

Meet author Alexa Kang and see for yourself:

Q: Alexa, what is your background? Where were you born, raised, and how did you grow up?

A: I am a WWII historical writer from Boston. I’m Chinese-American, born in Hong Kong and grew up mainly on the East Coast. Before I repatriated back to the USA three years ago, I lived and worked for ten years in Asia, and traveled to many parts of the world. My travel experience, and experience living overseas, has helped me greatly in writing stories set in countries where the war took place.

Q: When did you realize you wanted to write?

A: I never aspired to write. This all started because of the Japanese manga “Candy Candy”. I grew up reading the “Candy Candy” manga and watching the “Candy Candy” anime, which was shown around the world in the late 1970’s and early 1980’s (except in English-speaking countries) and was super popular. The story “Candy Candy” was written by Japanese writer/poet Keiko Nagita (a/k/a Kyoko Mizuki). The manga and anime had ceased publication and broadcast in the 1980’s. But due to its popularity, “Candy Candy” gained a very dedicated global following of fans, especially in Latin American countries, but also in France, Italy, Spain, some European countries, and many East Asian countries. Many fans who are now adults have connected together since the emergence of the internet. I’m one of them.

The problem with “Candy Candy” is that the main protagonist, Candy White, was separated from what many fans believed to be her one true love, Terry. Their separation traumatized many of us for thirty years. A lot of fans kept writing fanfics to try to fanfix this problem.

Then came the good news in 2010, when Keiko Nagita published “Candy Candy Final Story” (“CCFS”), an updated version of the story “Candy Candy” in a two-volume novel format with a lot of new information not previously told in the manga, anime, and earlier novels. In “CCFS”, Nagita wrote that Candy White was now a woman in her thirties, living with her husband, whom she referred to as “Anohito”, without naming the identity of Anohito. After analyzing all the new details in “CCFS”, many fans concluded Anohito is Terry, and Candy finally reunited with him. I believe the same. But because “CCFS” did not tell how Candy united with her Anohito (i.e., Terry), I wrote a fanfic that told the story how she and Terry got back together. The story was just bursting in my head and I had to write it down. I shared it with other “Candy Candy” fans online. My fanfic was very well received, and it was subsequently fan-translated into French, Italian, and Spanish.

I suppose the time when I felt an unstoppable need to provide an answer to Candy and Terry’s reunion was when I realized I wanted to write. But at that time, I only wanted to write their story. I still didn’t mean to ever become a writer.

Q: How did you segue into writing novels about WWII?

A: Initially, I had no aspirations to write books about WWII at all. After my “Candy Candy” fanfic, I was besieged with an urge to write a love story between the children of some of the “Candy Candy” characters. These children are entirely my own imaginary construct, and did not appear in any way in the canon.

The problem here was that “CCFS” ended in the mid-1920’s. That meant the story of these next-generation characters landed smack in the middle of the war! So if I were to write this next generation story, I would have to write a full-on WWII historical fiction. It was a very daunting goal at the time, as I didn’t really know much about WWII except what I learned from history classes in high school and college.

But these characters came alive in my head, and they wouldn’t let me rest in peace until I told their stories and put their stories into words. So I had no choice but to go ahead. Their story became the “Rose of Anzio”, an epic four-book series. When I began, I wrote it as a fanfic. Each week, I would write a new chapter and share it online with “Candy Candy” fans. They loved this new story and gave me a lot of support. We had a lot of fun like that for more than a year. When I came to the end of this long series, I realized I could share it with a wider audience. From that point forward, I began working with publishing professionals to turn the series into a polished set that would appeal to readers beyond the “Candy Candy” fandom.

A welcomed surprise from this experience was that I learned so much about WWII from doing research for “Rose of Anzio”. Thereafter, I continued writing WWII novels, and I try to bring something different to the genre through my books.

Q: Your stories often feature cross-cultural characters. Is that an important element of your writing, or in your own personal life?

A: I think writing cross-cultural characters is inevitable when writing WWII historical fiction, because WWII was a global war. Back then, most people never traveled far from their homes either. The war created a situation where massive numbers of men were transported to countries and continents where they otherwise would never have been. So I would say it is an important element of my writing as a matter of fact.

What is my personal choice though, is my recent venture into writing WWII novels set in Asia. WWII novels about the Pacific front is rare. I think my Asian language skills and personal experience of Asian cultures give me a unique ability to bring to readers stories that can offer them a more authentic experience of WWII Asia.

Also, from my observations, multicultural characters are now much more accepted and even welcomed in entertainment media. In my last series “Shanghai Story”, I wanted to see how an interracial romance between an Asian man and a Caucasian (Jewish) woman would strike my readers. I was very wary when this series debuted, but it turned out to be a great success. There seems to be a hunger on the readers’ part to want to read more about what happened in Asia during WWII, and the interracial romance was well-received, too.

Q: As a novelist, where do you see yourself in the next few years?

A: It’s hard to say. For me, writing is a creative process that happens only when characters come alive in my head. I do have ideas of subject matters that I want to write about, but I can’t force it. It’ll all depend on whether the new characters wish their stories to be told. I hope they’ll come and find me.

Wow, Hip Hapa Homez. You have to admit Alexa Kang is pretty amazing!

Hey, don’t forget our 5-part film series, ‘War Brides of Japan, a docu*memory’ is available for rent on Vimeo. 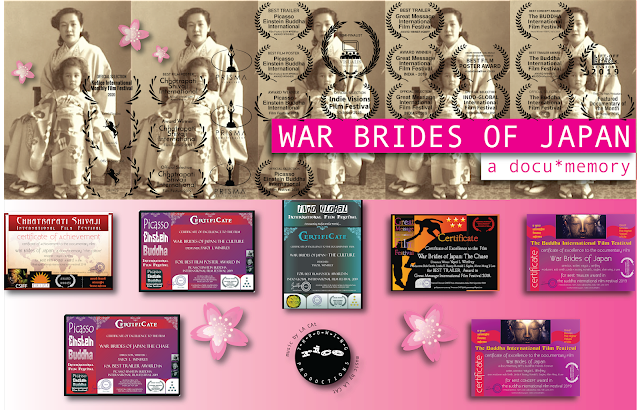 Here are the links to each one of the five films:

And a MWAH! to all our donors listed at our website:
(Scroll down to ‘our Donors’)

War Brides of Japan, a docu*memory: The Chase

And, as soon as we can, we’ll add the latest winning film festival laurels to our Screenings page:

Until June 30 and our next post, we wish you lots of lovely reading and film viewing while you’re inside sheltering from this crazy, topsy-turvy world.