"Curly Like Me" In Da Houze! (And In Bookstores, Too!)

Hey, Hip Hapa Homeez! Welcome back to our world where we embrace your multiethnic selves, transracially adopted upbringings, and cross-cultural lifestyles. In fact, anything that represents your unique experience as a multi-culti or blendie-mixie is what we hold most dear.
Speaking of, one of my dearest friends and the first Facebook person I ever met in the flesh (pun intended) is also this week’s featured Hip Hapa Homee, Teri LaFlesh. Known by many women for her fabulous hair and valuable advice on how to make theirs look like hers, Teri is finally having her book (published by Wiley) on the market this week.
Check out her links below then move on down to the Q&A. Be inspired by Teri’s “before” and “after” photos, too, and click the Amazon link to buy her book.
http://www.biracialhair.org
http://www.amazon.com/Curly-Like-Me-Healthy-Strong/dp/047053642X/ref=sr_1_1?ie=UTF8&s=books&qid=1273007525&sr=1-1
Q: What's a nice multiethnic girl like you doing writing a book about hair?
A: Actually, it was in large part due to my being mixed that ultimately inspired me to write this book about hair. I half grew up with my mom, who is black, and experienced how very curly hair is dealt with in many black communities--especially at the time I was growing up. Mostly, the choices were relaxers, hot combs, or the brand new Jheri curl. All the women on my mom’s side of the family relaxed their hair. So my hair was relaxed before I even knew it was curly. Since my hair is very fine, it fell apart under the lye-like chemicals, and became as stiff as fondant.
In my teenage years, I lived with my dad, who is white. We lived in a white neighborhood, his wife was white, and all my family on that side was white. Suddenly, I was left alone to care for my hair. It was a shock to me that it grew out curly. I had no idea what to do with it, and I tried to treat it like the hair of everyone around me (which was a disaster). So there I was, the only person of color in my entire vicinity, and I had this super-curly hair I had no idea what to do with. And, that curly hair that was like no one else’s hair began to symbolize how I felt about my place in the world at that time. I felt like an outsider, but an outsider who was let into the inside. I belonged, and yet I looked totally different from everyone I saw, so I felt I didn’t really belong. And, my crazy hair that puzzled and alarmed people around me seemed to be proof that I was different.
So, when I finally (finally!) figured out what my hair wanted (which was the hair equivalent of being loved and accepted for what it was, even if that was a bit different from everyone else), I wanted to make sure no other mixie girl with crazy curly hair like mine ever had to feel alone, or like there was something wrong with her because her hair seemed so different from either parent’s.
Q: How did you grow up?
A: I grew up in two environments that were polar opposites. I spent my early years with my mom, who is black. She was a public school art teacher (which meant we never had much money, and she was very creative), and lived in a black neighborhood. She was religious and lived in the south. I was surrounded by my outspoken family and lots of pets. Our place was always messy, and we ate junky food whenever we wanted. I went to a public school. We had few rules. I was bossy and the center of attention, and I mostly ran wild.
I spent my teenage years with my dad, who is white (as was his wife). He and his wife were computer programmers, so we had money. They were atheists. We lived in the northwest in an all-white town where I went to private schools. Our house was quiet and ordered and spotless, with no pets. We ate healthy food, but only at certain, previously arranged times. My life was run by rules. I was awkward and quiet, and very shy.
So I grew up not only between two races, I had two totally different childhoods, and lived as two different people with totally different personalities to fit those environments. But each environment taught me totally different and necessary skills I needed in life.

Q: Explain why you call yourself a "Former Mushroom Head Kid".
A: In the transition from living with my mom to going to live with my dad, a hairdresser gave me a Jheri curl over the relaxer my mom already gave me. The hairdresser had told me and my mom that as the curl grew out, I would have little ringlets on the ends of my straight hair. This sounded really pretty. Then, I went to spend that summer with my dad. When my dad saw the greasy Jheri curl activator, he forbid me using it. So, I dry brushed my already damaged hair every day into a crunchy cloud, and patted it into a round shape, and waited for that straight hair to grow out with the ringlets on the ends. It never came because (to my surprise) my hair wasn’t straight. In fact, it was very curly. Instead, my now triply damaged hair got bigger and bigger until it turned into a mushroom shape (see photo). The sad thing is I thought that stiff, broken hair-cloud was what my natural hair was like, and it was a specter that haunted me for many years whenever I thought about possibly going natural. 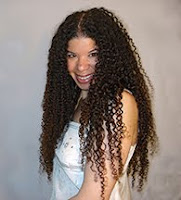 Q: There's so much good, scientific information in your book. How long did it take you to write it?
A: Aw, thank you for saying that! I did a ton of research for it. I’d say the book took about two years to do. The first year, I wrote it in snatches of free time, such as when I was riding the train to and from work, and would type what I’d written when I got home. The second year I spent taking the pictures for the book, and researching and drawing the illustrations for it.
Actually, it took me about 30 years of trying to figure out what to do with my hair. I figured it out for selfish reasons: I wanted hair that wasn’t an ordeal, but was just hair and not a big deal. I had no intentions of writing a book. It was one day (after I’d figured out how to make my hair happy) that I realized I hardly thought about my hair any more, and it was down to my waist, and I was happy with it. It was then that I thought I might have found out some things others might really want to know, too (and may not want to have to struggle for 30 years to discover).
Q: Will there be a book tour?
A: At this time, there is a tiny tour planned, but I’ll probably mostly sign books in bookstores in my travels visiting relatives. I’ll be at the Mixed Roots Film and Literary Festival in June. Honestly, I’m pretty shy in real life, so I’m happy keeping things lower key.
Q: What do you make of the current influx of published works by multiethnic people?
A: I think multiethnic people have had a very strong voice throughout time, however, they were often lending their voices to other fights, and their multiracial heritage was often downplayed, overlooked, or not acknowledged. Recently there has been an explosion of voices speaking as multiracial, and now refusing to be mashed into only one box. That’s very powerful and wonderful. I actually mark the turning point (for the media at large) as Tiger Woods, who helped put multiracial on the map. Often, when a race other-than-white is mixed with white, it seems to be the race of color that comes to dominate that person’s label to the world. Woods was one of the first celebrities I remember hearing about that wasn’t half white. Since he didn’t have a white parent (so he couldn’t just be lumped into the other-race-besides-white category), there wasn’t that neat default of placing him into the race of color as his automatic identity. Now people had to think about what he actually was for a moment: was he ‘Black’ or ‘Asian’ or ‘Something Else’? I think that not having an easy answer helped open many doors to the idea of being more than just one thing. Oooh. I hope that makes sense.
Q: What other writing projects do you have planned?
A: I’m working on a collection of short stories about my years running around as a wild child in the woods of Kentucky. I did some goofy things in those days, and was lucky enough to live in a home that let me get away with way more than I should have.
Congratulations, Teri! What an amazing author and humble Hip Hapa Homee, you are. btw, I love this quote from you: “When I made peace with my hair, I made peace with myself.”
Lately, Your Hip Hapa has been saving controversial clips (Sandra Bullock’s black baby, etc.) for the Hip Hapa Homeez Group page on Facebook. If you’d like to engage in a discussion, please join the group and leave your comments at any one of some 500 links posted there. Also, please sign up to “like” our Watermelon Sushi Fan page. Since Facebook has changed the rules, you no longer have to become a “fan”, but can just like us. You can also follow us on Twitter where we post dialogue from the Watermelon Sushi film script, and we promise to follow you back. Finally, show some love for the Watermelon Sushi film by checking out our Hapa*Teez t-shirts.
Until we meet again in our Watermelon Sushi World, I am
Your Hip Hapa,
Yayoi
Posted by Yayoi Lena Winfrey at 9:00 PM

I believe i've read an article you wrote on the web somewhere about your experiences growing up. It was spectacular! Look forward to following your blog. Take care!

afronativechick, your blog is so hip, you hapa homee, you! Thanks for taking the time to comment.